I often hear people say they wish they were a kid again because life was a lot easier. I've been watching Mac the last few days and I beg to differ. He's learning to walk right now and his day consists of falling and banging his head. A LOT.

A few days ago, I decided to take him downstairs and let him walk around there because I didn't think there were many places he could hurt himself. I had PVR'd a show and wanted to watch it and was going to let Mac wander around the basement while I did. Since there are almost no protruding corners, cupboards he isn't allowed in or places to get into trouble I thought we were safe.

We got downstairs and Mac started walking around, pushing his little truck walker. He walked it right over to the treadmill and started walking along the edge. And he wiped out. He managed not to hit the actual treadmill but caught his forehead on one of the screws near the base of the frame. He had a HUGE round dent in his forehead and inside the dent, there was a little scratch... that kinda looked like Harry Potters lightning scar. Poor kid. 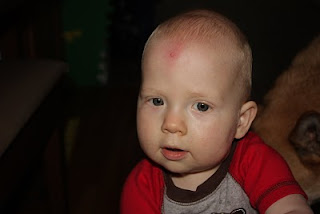 Yesterday he discovered a new toy. The toilet. That's right. I was washing my face and had stuck him next to the tub (he can walk and stand alone, as long as he has something to hold on to) and by the time I was done, he had worked his way over to the toilet and was elbow deep in it. Lovely.

This morning, I decided to bake breakfast cookies. My lovely sister-in-law to be gave me the recipe and once I got over the fact that they have white kidney beans in them (as a rule, I don't eat kidney beans) I discovered I actually LOVE them. They can be made into bars or cookies, whichever you choose.