It's been a while, I know I know.  Life has been a little hectic lately.  We were in the bush hunting during Thanksgiving weekend - well, Harry and Mac were - Isaac and I went in each morning and came out each night. We had planned to ALL stay in the bush but at the time, we thought Isaac was getting sick so I elected not to stay in the million year old, stinky, bug-filled bus-converted-into-a-camper.

As it turns out, Isaac was NOT getting sick but is beginning the awesome sleep depriving ride that every mother dreads - TEETHING.  This has turned breastfeeding from a sweet bonding time between he and I to a shark attack. Suffice it to say, my boobs are sore and now while I feed him I'm jumpy like a war veteran when a car backfires. As soon as I feel like he's going to start chomping I stick a finger in between his gums because once he bites down it's like trying to get a pit bull to release. Not gonna happen without some serious pain.

He's also following in the footsteps of Harry Houdini. We watched him very skillfully escape from his little jiggly chair. It's unbelievable and it culminates in him doing half a sit up which is hilarious to watch. I'm going to try to get it on camera and post it on here.

Mac on the other hand is becoming Mr Smarty Pants.  He loved hunting with Daddy and now likes to "hunt" for partridge in the house. It's pretty funny to watch. Yesterday, we were sitting at the table eating and all of a sudden he froze and looked out the window.
"MOM!! SHHHHH!! There's a partridge out there" he said, gesturing outside.
"Where?" I whispered, playing along.
"In that tree over there" he answered pointing to the tree across the road in the neighbours yard. "Be quiet mom, you'll scare him!!"

Today we were sitting on the couch when I asked him if he wanted to try to feed the rabbit a chunk of banana. *He was holding a little cup with a few pumpkin seeds in it, eating them slowly. I had refused to give him more because he tends to spill things and then get upset. * He fed the rabbit a banana and rabbit gobbled it up.

"Look at that, buddy!!" I said. "Apparently, Clover likes bananas!!"
He looked back at me for a minute and then said:
"Apparently, I want more pumpkin seeds."

He also had his first Pre-Can Skate class. It went pretty well all things considered. There were a few tears but all in all I was impressed. We're pushing him to do things without us so that when he starts school it won't be such a shock. He's adjusting pretty good considering he's never really been left with people he doesn't know (except for the babysitting debacle when I tried to go back to work). 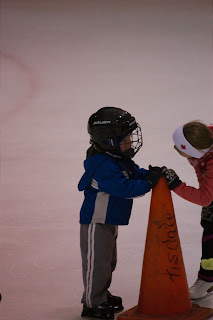 This is Mac skating. They had the girls from the figure skating club helping out. This one was so cute with him. 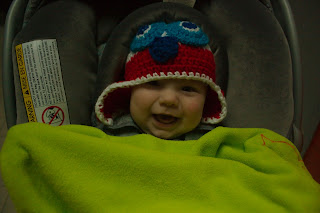 This is Isaac cheering him on at the arena. What a cutie pie.