I saw this project on Facebook last week and knew that even though I am NOT someone who sews much, I had to give it a try. It was for the cutest little cardigan onesie. It seemed fairly simple and straightforward. I went in to Value Village and found a super cute little onesie for cheap, and then ran in quickly next door to Fabricland for some binding tape and matching thread. I wanted to try it out first on something in-expensive before spending money on the brand new stuff. Being a total non-sew-er, I was pleasantly surprised with the results. It took me about an hour and a half start to finish and was really easy. So here goes. The tutorial I followed can be found here. It is very detailed and pretty much dummy-proof. Here are my results. 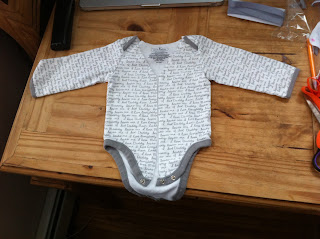 Here is the onesie after I did the initial cutting. 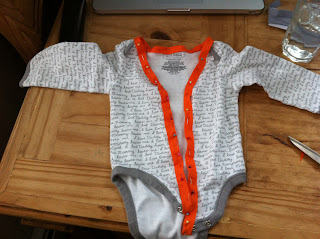 Then I pinned the bias tape to the edge, making sure that the onesie was tucked right into the corner of the bias tape. 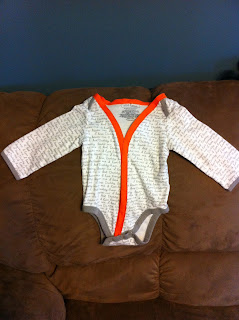 This is after I sewed on the bias tape. 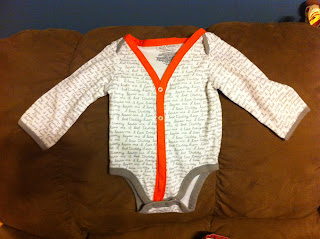 Here it is with two buttons. I was going to put three originally but I thought that his pants would end up hitting right on the third button. If it starts to gape between the second button and his pants, I can alway add the third button later.

So there it is!! Pretty successful if I do say so myself. I have some striped onesies from Bonnie Toggs so I will try it with them next and see how that goes.