I was talking to my mom on the phone earlier tonight and I told her something scary: I've come to the realization that pretty well everything I ever gave her a hard time about (crying during sad movies, frantically cleaning the house before guests arrive, calling her kids the wrong names, saying JUST BECAUSE when the kids ask why for the six billionth time...) I now do. And probably more. And worse.

To add insult to injury, I think I've finally done the last thing I can consciously remember saying I wouldn't do: Drink Coffee.

Her caffeine addiction is the stuff of legends in our family. We would tease her by saying we'd give her a few shots of espresso then invite her over so that she could clean the house with her excess energy. My dad said that while they were in Cuba, she drank so much coffee that she hardly needed the plane in order to fly back. Pretty much any coffee joke applies to her. Her basement decor is little cappuccino mugs on wallpaper. My mom's sister got her something that had this quote on it: 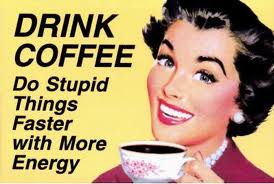 Yep we gave her quite the hard time. Now, *hangs head in shame*, I'm jumping on the caffeine bandwagon. And I like it!

I randomly picked up the Starbucks Via Peppermint Mocha package one day at the grocery store. I'd heard people RAVING about this drink from Starbucks and was wondering what all the fuss was about. To be honest, I didn't think I would like it and was actually planning on using it in a recipe for meringues that my sister-in-law had given me. But, one day last week, exhausted and not able to nap, I decided that I would try to choke down a cup of this stuff and see if it would get me through the afternoon. I carefully made it according to package specifications and with great trepidation I took my first sip. I honestly think that my tastebuds were too scared during the first sip to actually fully appreciate how yumtastic it was. I took an other sip. And an other. And the next thing I knew, the mug was empty and I was happy. I had energy. I cleaned. It felt great.  The next day, I tried to drink something else in it's place and it did nothing. My tired little body cried out "Give me the good stuff!!" and finally I had to admit defeat. I am a coffee drinking, caffeine fuelled cleaner. Just. Like. My. Mom.

I stayed up till 11 last night working on Christmas gifts. I was sure today would suck. But a well timed afternoon hit of Mocha/Pepperminty Goodness made the day seem brighter. I cooked supper AND danced to Christmas music in the kitchen with Mac. *sigh*

Welcome to the dark side. Wanna coffee?
Email Post

Anonymous said…
Love this post Dan. I can still hear you saying something about being a "hypocrite" for cleaning the house for company.....and me thinking "wait til you have your own place.....and kids......
I just read this to Louise Giroux and she loved it to. You have a great way of putting pen to papper or is it keys to screen ???? Love you, keep it up. Mom
December 12, 2012 at 10:11 PM