Good Thing It's Not a T-Rex

This post will likely be a testament to my exhaustion. And, just to warn you, there will be a picture of poop.

Anyhow, today started off with a heart attack. Not a bad one, but an "I can't believe my eyes" kind of heart attack. I was emptying the dishwasher in a sleep-deprived stupor when Isaac decided to this would be a good time to pull himself up. Seriously, this kid has killer core strength. This photo doesn't really do it justice. I have a video of it, but I can't upload it on here. *Grrr* 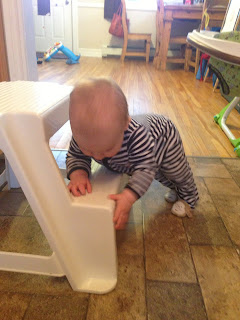 Then, I went to change his diaper before putting him down for his nap and here is what I saw.

Being a mature adult not the least bit amused by poop, I immediately texted the photo to several choice people. Their reactions were nearly funnier than the picture. My sister-in-law's reply was simple and straight forward. "Ew haha". My friend Mary didn't answer for an hour, but when she did she said "I was in the dr office and I almost peed my pants I was laughing so hard" and my favorite one was the reply from my cousin:
"LOL Good thing it's not a T-Rex".

I love my family.

Edit: I emailed it to my dad after posting it and he wrote me back with this "Kraposaurus". I TOLD you my family was awesome.
Email Post