Today started off kind of crappy. I woke up in a fog.  You know those days where before you even open your eyes, you know that you're already fighting a headache, you're going to be drinking coffee like it's your job, your patience is exhausted and nothing's happened yet but you're already grumpy?( I bet you're thinking, Boy, her husband is such a lucky guy to be saddled with her. Yes. Yes he is.)

It started with Mac pestering me all morning to go play at his new favourite friend's house (his words not mine.) I explained to him 18 times before nine AM that his friend wasn't home this morning but it never sank in, so he continued to ask. All. Morning.

Isaac managed to completely cover himself with peanut butter during breakfast so I had to give him a bath immediately after. While he and Mac were playing in the tub - because God forbid Isaac takes a bath alone - I was sitting on the bathroom floor with my agenda and computer figuring out our budget for the next two weeks.

When Mac's friend got home, they managed to play together for three seconds before getting into an argument over who's turn it was to drive the Jeep. Mac said that it was still his turn because he wanted a big turn and his friend could only have a little turn. Try explaining the golden rule to a grouchy melting down toddler when you're already exhausted and see what that does for your mood.

Then his friend went home and I tried to feed Mac and Isaac at record speed (all the good parenting books say this isn't a good idea) because I had a fun outing planned for us. FAIL. Mac whined, Isaac threw macaroni and I finally had my first massive experience with "The Surrender" (look it up - it's worth it). So I decided that fruit smoothies and french fries from McDonald's were going to constitute lunch if I wanted to keep my sanity and I packed the kiddos up in the car and hit the road.

What was our fun outing??  My friend Louisa was taking us to her super-cool friend Stacey's farm. Stacey has chickens, cows, rabbits and a really gorgeous German Shepherd. And Louisa had told us that Stacey would let Mac pet a cow.  After the morning we were having, a little change of pace was exactly what we needed. (I may have frightened Louisa though, who is pregnant with her first child and due in three weeks. She opened the door to my car and her rear-end was hardly in the seat before I looked at her and said "I don't know if this is a good idea. Today might be the day my kids make you wish you'd used birth control." Thankfully, she is cool and has a good sense of humour and I don't think I scared her. Much.)

We arrived and Stacey took us to the cow pen. The cows were a little shy and didn't get too close but I managed to get Mac to stay still long enough that one came up and licked his arm.  (One licked me too. It's a really weird feeling.) Can I just say that cows are really beautiful?? They have the longest eyelashes.  Then we went to the rabbit pen and got to see the bunnies. After that, Stacey told Mac that she had saved a special job for him. He got to let all the chickens out of the pen. It was hilarious to watch, because I think he was only expecting three or four chickens to come out... there were about 50. I think his head almost exploded. Then, she brought him in the barn and he got to collect the eggs. He was in his glory. It was so nice to have fun with him after the rough start to the day. 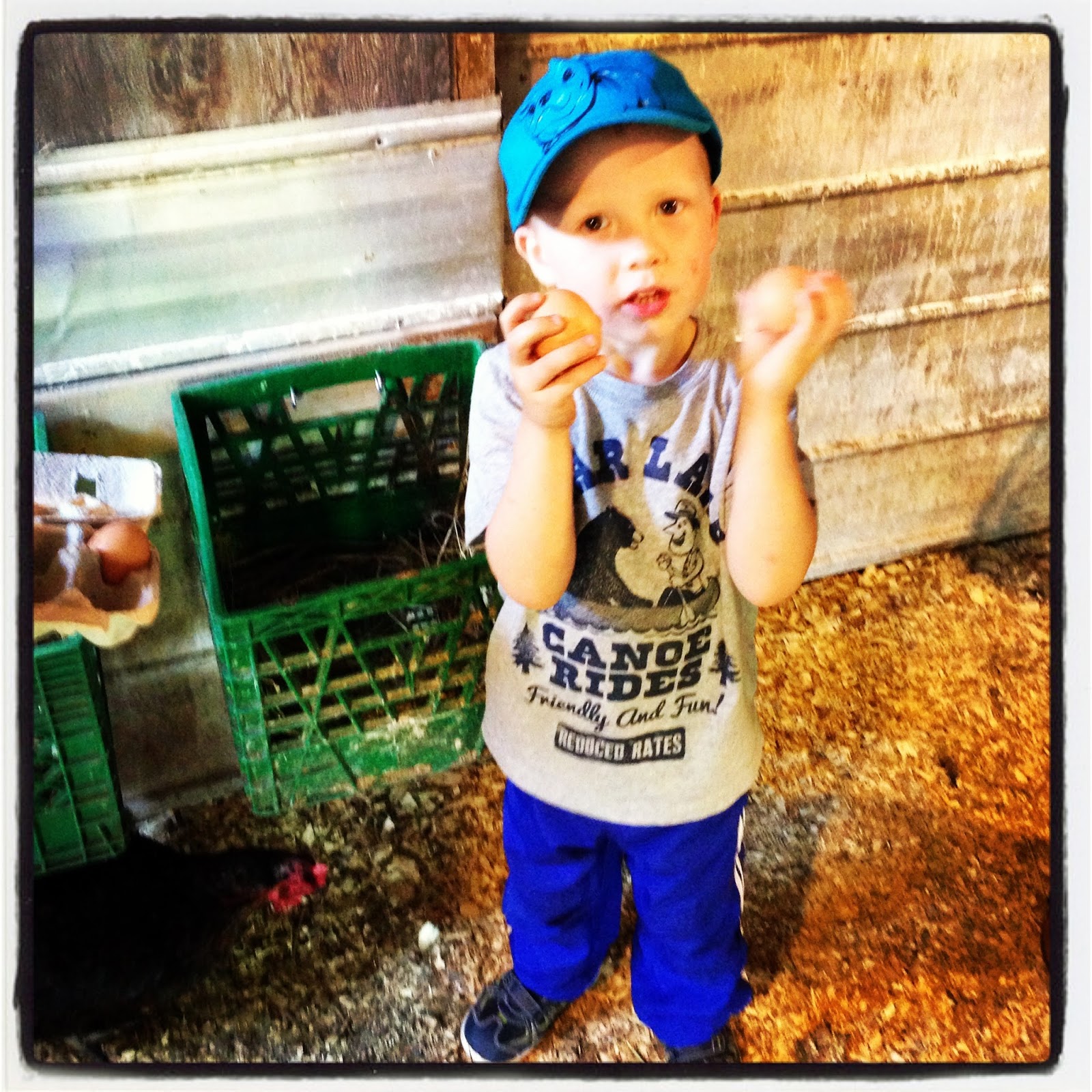 This kid loves to work and have a job, so this was right up his alley.  Then we said goodbye and came home. 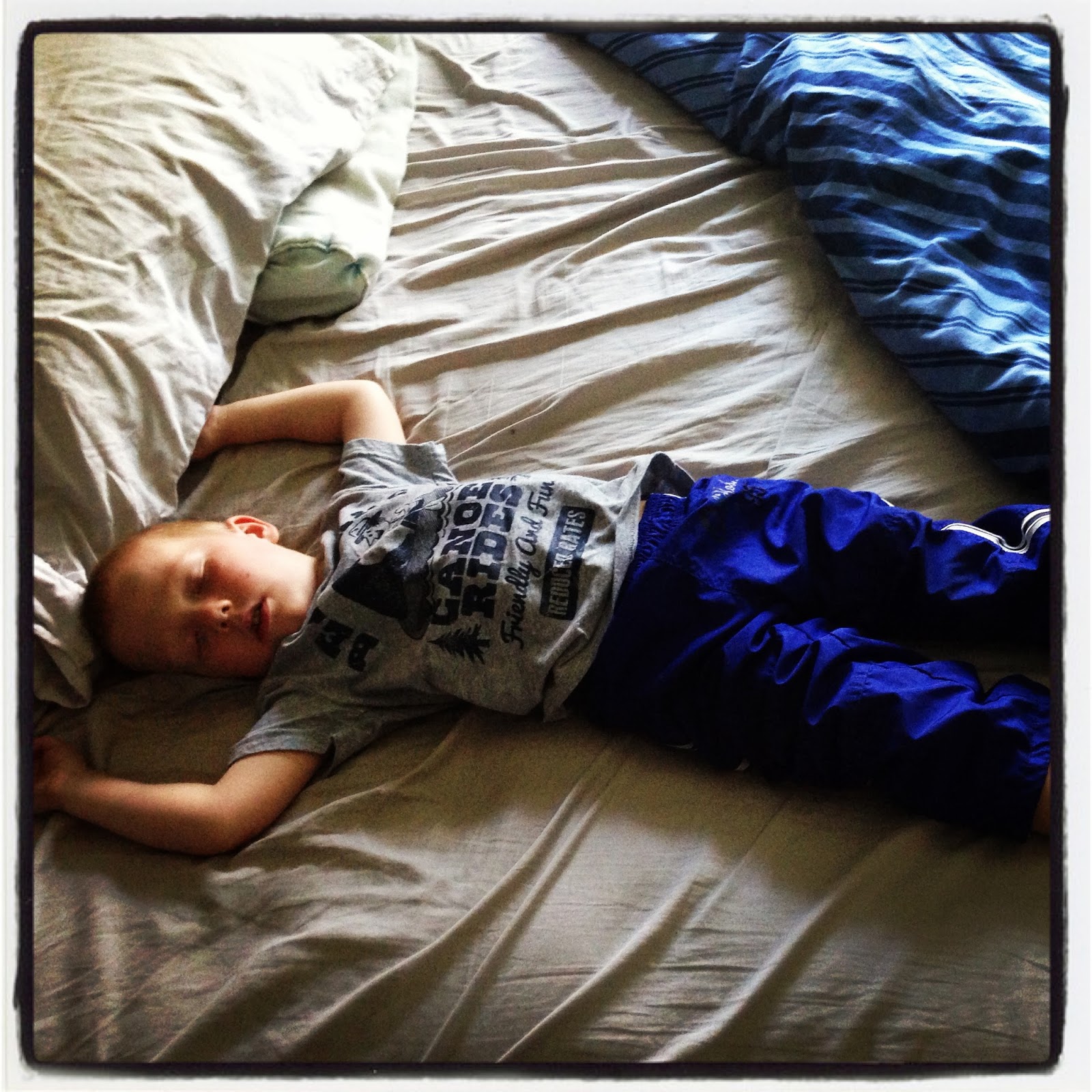