Mac has started school. It feels so bizarre. Part of me feels like he was just a baby yesterday, and part of me feels like it's been forever. One thing is for sure - he is READY for school. He's such a smart kid and the learning and structure will do him good.

Here's the picture I took of him the first day. I totally didn't think to tell him to get on the bus and turn around and wave, so all I've got is a shot of the back of him getting on the bus. 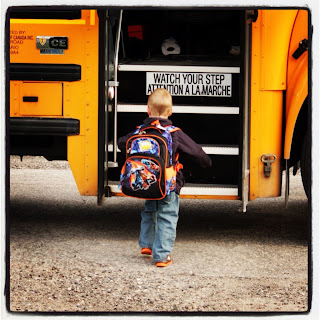 It was so cute. He had this look of intense determination on his face as he walked towards it. The funny thing is that I was totally OK with him going to school. I'd talked to other moms who were really emotional about it and I wasn't... until he got on the bus, sat down, waved at me out the window and the bus drove away. Then, I had to choke back the urge to cry. 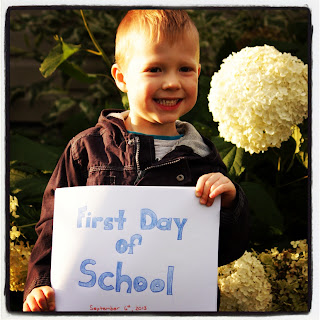 So when it came time for the bus to drop him off, I was ready. I had set up my phone on the porch to record a video of him getting dropped off, and I had my camera out so that I could get a shot of him getting off the bus with a big smile on his face. That's not exactly how it went.