People who know me have probably heard me refer to Isaac, my two and a half year old, as a terrorist on more than one occasion.  While some people (who don't know Isaac that well) shake their heads at me and mutter words like "inappropriate", and "exaggeration", I assure you that the term is quite appropriate. While he usually doesn't intend to cause other people pain or suffering - I say usually because I've seen him around Mac and I know that there are time he is inflicting pain on purpose - he is capable of mass destruction in a short amount of time. 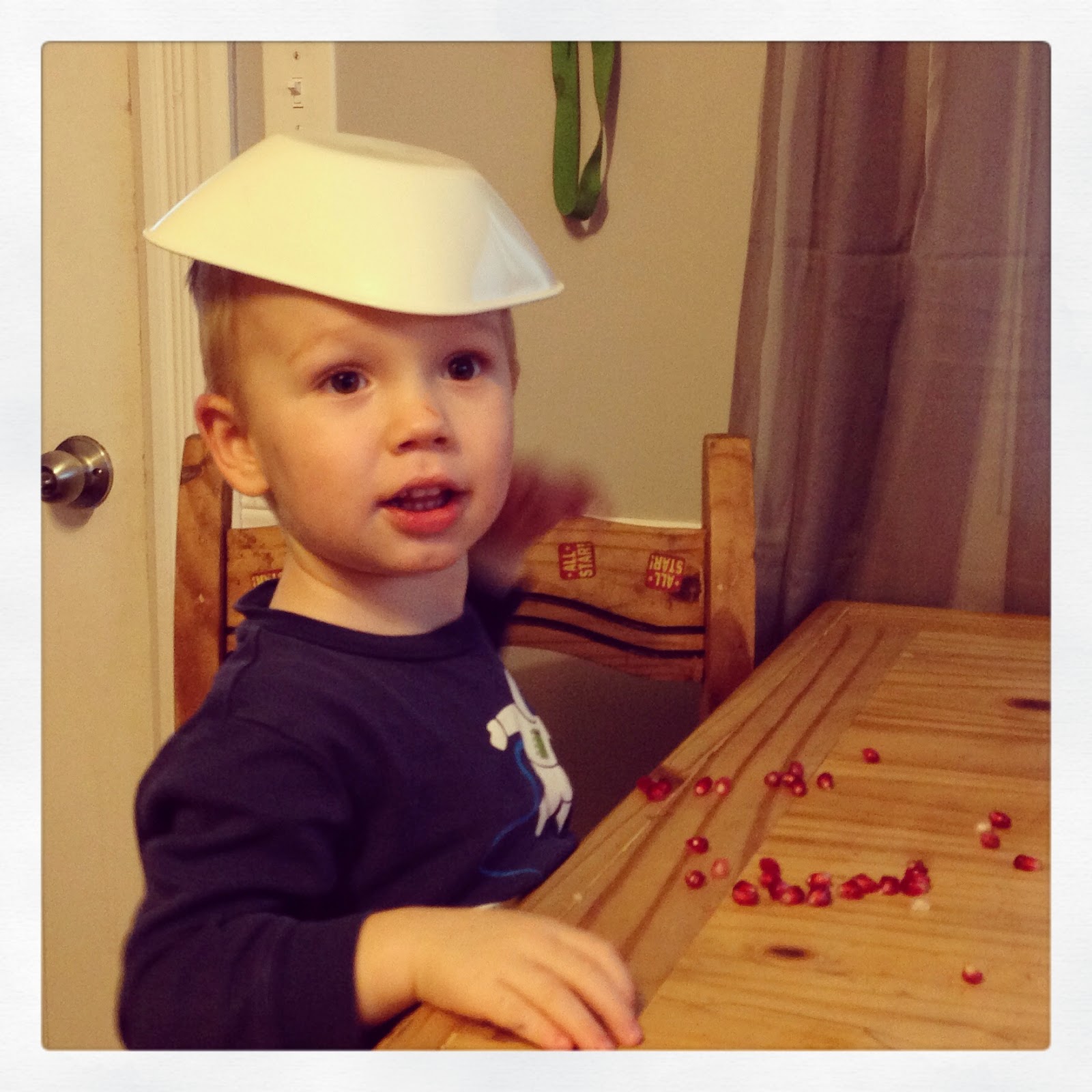 But I'm starting to think that I should start referring to him as my comedian. Lately, his sense of humour seems to be developing and the poor kid appears to have inherited my oddball taste. The latest example of this happened at church this Sunday. But first - some background.

This past week I had to do some shopping at Walmart and Isaac came with me. While we were getting our shopping done, Isaac became aware of the announcements being made over the PA system. At first he would just listen with wide eyes, but after a few minutes, I guess he decided that it would be much more fun to turn the announcements into an interactive experience. After each announcement, he would either yell "YEAH!!!" at the top of his lungs in a very enthusiastic manner, or repeat what he could remember of the announcement at a decibel level that approached ear-shattering. (If you were there that day and you remember us - I'm sorry.) I tried to shush him a few times, but it's hard to convey to your kid that you mean business while you're snickering and giggling too. We made it out of Walmart without any major catastrophes and I thought that that was that.

Sunday morning at church, I brought him upstairs into the sanctuary portion of the building. Usually I drop him off in the toddler room but he seemed tired so I thought that I might get lucky and he'd fall asleep. Also, when I drop him off, he screams blue bloody murder for a few minutes and I end up feeling horrible for the volunteers working. So we sat down and everything seemed to be going well. The service started and the pastor made an announcement asking everyone to stand for a minute and observe a moment of silence in honour of the people who fought and died in the war. No problem. I stood up, along with everyone around me.

Now, I have enormous respect for anyone who's served - my brother did, and I don't take that sacrifice lightly. So there I was, standing and remembering and fighting back tears (stupid hormones) and in general being thankful that my brother came home from the war alive. The sanctuary was dead silent. Then, I heard a little voice cut through the silence with "WHAT ARE YOU DOING, MOM?!?!". *cringe* I quickly shushed him and he stayed quiet for the remainder of the minute. After the moment of silence we sat down and I thanked my lucky stars that we made it through that minute without any more noise.

Following the moment of silence, a few people stood and said prayers. Now, I don't know what happened in Isaac's little brain, or what prompted him to do this. I don't know if the sound system in our church reminded him of the PA system in Walmart, or if he was feeling inspired by this gentleman's fervent prayer but once again a little voice piped up...

The gentleman was praying for people and churches in countries where there is persecution. And Isaac, I guess, decided to cheer him on.

Guy Praying: "... and Father, I just want to pray now for our brothers and sisters in countries who aren't free to worship like we are."
Isaac: "Yeah."
I am embarrassed and trying not to laugh but know better than to say anything to Isaac because it will just prompt a "WHY" at the top of his lungs. So far, he isn't that loud.
Guy Praying: "I pray that you keep them safe."
Isaac: "Yeah!!!"
Now it's not just me, but the family sitting next to us that are shaking in silent laughter. Thank God they are friends of ours.
Guy Praying: "I pray that you encourage them.."
Isaac: "YEAH!!!!"
Now pretty much everyone in our section has heard him as he's become quite a bit louder and you can see shoulders shaking and hear the odd titter.

Thankfully, the prayer ended not long after that and Isaac never really ramped up and started repeating the poor man. Suffice it say, not long after that I made my way down to the toddler room and dropped him off. I'm thankful that I attend a church that finds that sort of thing amusing too and takes it in a stride - it makes things a lot easier.

And this whole situation reminds me of something else. I remember when I was young, sitting in church with my parents and mimicking the preacher's hand gestures. I remember my mom being pretty embarrassed by it too.

Mom, remember when I was younger and I was being difficult (I know, that's hard to believe), and you used to say " I hope you have a kid just. like. you. Then you'll understand"? Well, it appears that I have. With interest.