How Isaac Took Ten (more) Years Off My Life

Did you know that Visine is sometimes used as a date rape drug? Neither did I. At least, I didn't know until Isaac basically roofied himself with it. This is the story of how Isaac took ten years off my life. With eye drops.

Wednesday morning, I decided that I would clean out the hutch that is in our living area. When we're busy (read: every day) it ends up becoming a catch-all for papers, mail, stuff we're trying to put out of the kids reach and assorted other junk. It was starting to become an avalanche hazard and was a pretty big eyesore. As I started to sort through it, I sent Isaac into he bathroom to brush his teeth. He had been in the bathroom maybe thirty seconds when it registered that I couldn't hear him brushing yet, so I poked my head around the corner to see what he was up to. He's been known to unroll whole rolls of toilet paper, dump out brand new bottles of shampoo and spread moisturizer all over himself in a matter of seconds. There he was, tooth brush in one hand and a bottle of Visine for red eyes in the other hand. The cap was off the bottle of Visine and it was 1/3 empty. I had just purchased that bottle last week and had only used it a few times so I knew that he had emptied some of it out.

Shaking my head, I took the eye drops away from him and brought him into the hallway where I was working, sat him down and told him to brush his teeth where I could see him.  I assumed (remember what they say about assuming?? ) that the eye drops were just a saline solution so I didn't give it an other thought. This was at about 9:30 in the morning.

I finished cleaning the hutch and was getting ready to vacuum when I noticed that Isaac had become unusually quiet and docile. He was sitting on the lazy boy watching TV and basically nodding off. He also looked really pale all of a sudden. I checked the time and saw that it was only 10:15. This is not normal. Usually, if I can even get him to nap, it's not till 1 or 2 pm. However, we had all been fighting a nasty cold, so I thought maybe he was just feeling under the weather and shrugged it off.

Fifteen minutes later, he was still struggling to stay awake, so I brought him into our bedroom and laid down with him on my bed. He was asleep within 20 seconds.  We napped from 10:30 to 1:00pm. I got up and started lunch and he got up not long after me and wandered into the living room. He seemed really groggy and not himself. He climbed back into the lazyboy and started nodding off again. 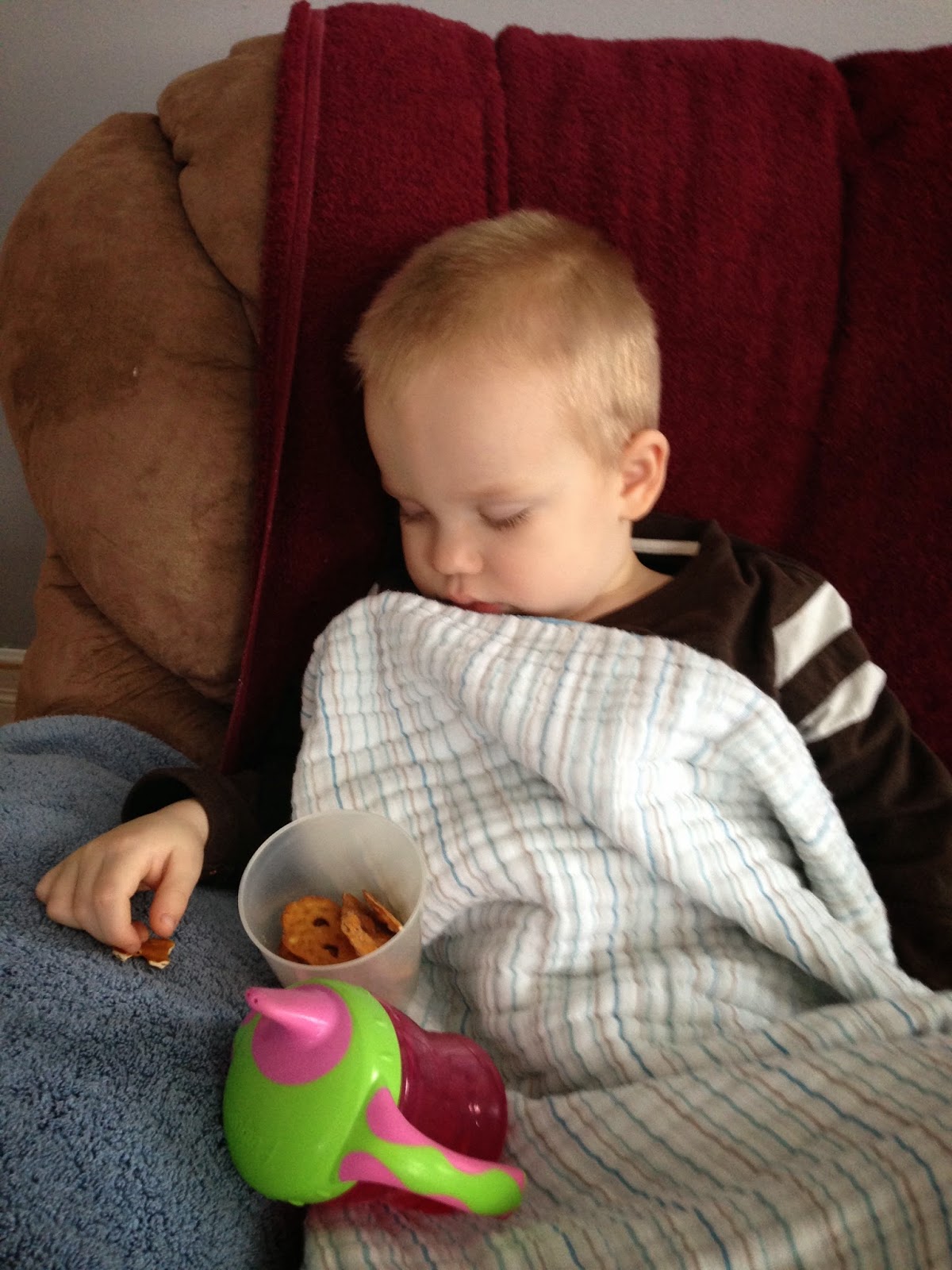 At this point, I Facetimed my sister in law.  I was getting worried about him. I had noticed that his breathing was a little funny - he wasn't not breathing, but he was taking really shallow breaths and then every now and then, he would take a long, shuddering breath. I asked her her opinion and debated going to the hospital. He didn't have a fever so I decided to stay home and just watch him, since I didn't want to bring him to Emerge and expose him to God only knows what else, just to be told he had a cold and be sent home.

He slept off and on all afternoon. I was starting to get scared. I wondered if maybe there was a weird flu that was going around that was sapping energy in a big way. I wondered if he was just catching up on his sleep after being sick for a week. I wondered all kinds of things, but kept telling myself to not over react.

Harry got home at 4:30 and Isaac was still dozing on the chair.  I had a pit in my stomach and kept checking on him every couple minutes. I'd listen to his breathing. I'd feel his forehead to see if he had a fever yet. I'd tell myself to relax. And then I'd do it all over again.

I made soup for supper and we got him up and sat him down at the table to eat. This was at 5PM. He was dozing off at the table. A few times, Harry had to reach out and steady him on his chair because he was leaning sideways.  I expressed my concern to Harry and he agreed that something wasn't normal. I asked him if he thought that maybe Isaac was getting pneumonia - thinking that that might explain why his breathing was weird. Harry asked me if I was sure that he hadn't taken any medication.

I told him I was sure he hadn't. I had moved all the medication to the top shelf of the medicine cabinet about two months ago when Isaac started climbing up onto the toilet. I had even gone into the bathroom to double check that nothing was out after Isaac had become drowsy.  I said "All he had in there was toothpaste and Visine." Harry's face dropped. He told me that Visine has been used to drug people before (Apparently there's a scene in the movie Wedding Crashers that this is done to someone) and that he thought it was supposed to cause digestive distress - explosive pooping and puking.  I told him that Isaac hadn't done that and went on my computer to google Visine ingestion.

What I saw nearly stopped my heart. It's called Tetrahydrozoline poisoning. Eye drops that have medication in them to reduce redness and irritation basically contain an anesthetic. When ingested, it causes coma, difficulty breathing or no breathing, low body temperature, irritability, nausea and vomiting, seizures, tremors, headache, fast heartbeat, changes in blood pressure, nervousness among other things.

I'm not going to lie - I panicked. I've always prided myself on my ability to stay calm during emergencies - I didn't freak when Mac got bit by the dog and had to have stitches on his eyelid, I was calm when Isaac's lung collapsed at birth, I even kept my cool when Isaac scaled the closet organizer and got Armour All off the top shelf and had to be brought to hospital for blood work to see if he'd drank any of it.  But this time, I couldn't calm myself down.

Guilt like I've never experienced coursed through me. Why hadn't I taken him to the hospital in the morning? Why had I ignored my gut instinct that this wasn't normal? Why hadn't I put two and two together - he played with eye drops and then got lethargic - DUH!! What kind of damage had I caused to his internal organs by not bringing him in and allowing it to be absorbed into his system? What if he died? It would be my fault. Stories like the one of the little boy who ate a dishwasher tab and died kept running through my mind.

I got to the hospital and found Harry and Isaac in triage. The nurse was monitoring Isaac. We knew that he'd ingested about 5ml of Visine, since the 15ml bottle had been full and was now missing 1/3 of its' contents. (Side note: If someone in your house ever drinks something that is poisonous, bring the container with you to the hospital. It helps when talking to poison control and it helps the doctors know the exact ingredients.) The nurse told us she would call poison control and get right back to us. It took maybe five minutes before we were called into the back.

When we finally saw the doctor, he told us that the danger period for coma, seizures etc. is usually within six hours of ingestion. Since we were at about 10 hours, odds are he was going to be fine. They kept us in an extra hour for observation and then we got to go home.

We put Isaac to bed. I think I checked on him six or seven times between 8pm and 10pm.  His breathing still wasn't 100% back to normal and my blood pressure definitely wasn't either.

I feel like Isaac's guardian angels probably don't get much rest.

So if you're reading this, go into your bathroom, take the eye drops and put them up with the Advil and the cold medication.

And know that it's never too early to talk to your kids about drugs.
Just kidding.
Well... not really.
Email Post