Have you ever overheard your children talking, or said something yourself then immediately thought I never thought that phrase would come out of my/their mouth? It seems like those moments have been happening frequently in this household lately.

Maybe it's because both kids are home all day together, maybe it's a result of lack of sleep aggravated with too much coffee (at this point though, I maintain that there is no such thing as too much coffee - the shakes and jitters just mean that it's working, right?) or maybe that's just what happens when you have a three year old that is potty training, a soon to be six year old and a sarcastic sleep deprived mom in one place together for long periods of time.

You want an example, you say? Buckle up.

The other day, my husband was using the "facilities". Newly (mostly) potty-trained Isaac -hallelujah!!- sauntered into the washroom, whipped it out, and started sharing the toilet with his dad.We're still working on bathroom etiquette. I heard the sound of my husband dodging a stream of urine before he shrieked said "Isaac! Point that thing down!". (Yes, in case you are wondering, I was rolling around on the floor laughing and absolutely no help to him at this point.)

Speaking of potty training - I think the phrase house-breaking more aptly applies to Isaac - there was that time that he was sitting on the toilet and hubby was encouraging him to poop. Isaac tried to oblige him by pushing very hard.
Isaac: *grrrrunt* *BURP*
Hubby: "HEY!! That came out the wrong end Booboo! You should be pooping, not burping!"

Or that time we were in Walmart and a middle aged man walked by in a Batman t-shirt and Isaac, in a scene eerily reminiscent of the movie Elf when Will Farrell's character yells "SANTA!!!!!", yelled "IT'S BATMAN!!!!!!! MOMMY!!!! IT'S BATMAN!!!" Just in case people weren't sure who he was talking about he also pointed at the poor guy who sped up to get by us as fast as he could and very determinately made no eye-contact whatsoever.

This morning, I was laying in bed listening to the two boys, who were sitting on the couch watching Paw Patrol for the one millionth time. Mac was trying to explain the characters to Isaac and I guess Isaac got a little too close to Mac's face. 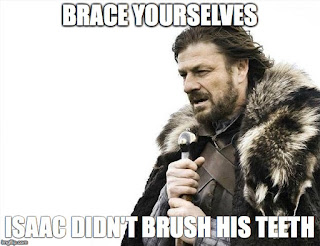 I feel like as a parent I should start to compile a book of each insane, ridiculous and socially unacceptable thing my boys do so that when they grow up and have their own kids who regularly embarrass them in public and they try to complain to me, I can just hand the completed book to them and say "Enjoy".

Mom and Dad, you aren't allowed to comment on this post. I'm very aware that they come by it honestly. And genetically.